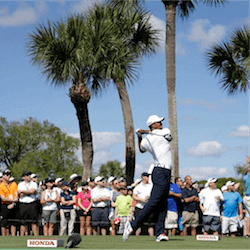 Australia’s golf fans have access to plenty of betting online, and the next PGA tournament they will have in their sights if the Honda Classic from February 20-16. The PGA tournament has been run annually since its inception as the Jackie Gleason’s Inverrary Classic in 1972, and punters can expect an excellent field at the 2017 event, to be played at the PGA National Golf Club Champion Course in Palm Beach Gardens, Florida.

Reigning champion Adam Scott, the Australian who was No. 1 in World Golf Rankings in 2014 and is currently ranked 7th, will be back to defend the title. He won’t find it all plain sailing as the tournament favourite, however; World No. 9 Sergio Garcia is also confirmed for the Honda Classic. He’s coming straight from his victory at the Dubai Desert Classic last weekend.

English players Justin Rose, Danny Willett and Paul Casey, currently ranked at Nos. 12, 15 and 16 respectively, are also confirmed in the field. However, with 10 of the confirmed Honda Classic players in the World Golf Rankings Top 25, it’s too early to settle on a favourite.

Rory McIlroy Hoping to Be Fit

One of the players Australian golf fans will want to see in the tournament, but whose participation is now hanging in the balance, is Northern Irishman Rory McIlroy. The World No. 2 has withdrawn from two tournaments in the UAE over the past month, after injuring his ribs last winter testing new clubs.

Presently, word from the McIlroy camp is that he is confident that his rib stress fractures will be properly recovered in time for the Florida Tournament. It remains to be seen whether he will be fit to play, however.

After a two-year break and repeated back surgeries, Tiger Woods made an impressive return to competition in December, shooting hundreds of places back up the rankings after just one tournament. However, last week he withdrew from the Dubai Desert Classic suffering from back spasms.

Although the word is that these spasms are not related to Woods’ original injury, it’s still a worry for his fans. No doubt, a lot of betting enthusiasts are also hoping he will be back in shape in time for the Honda Classic.