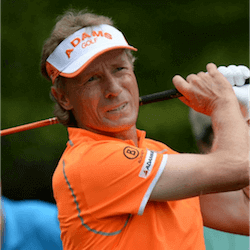 Veteran German golfing great Bernhard Langer has one less opponent to worry about in the Constellation Senior Players Championship in Maryland, USA this weekend: former Masters champion Fred Couples withdrew before the first round teed off at Caves Valley Golf Club near Baltimore on Thursday, with a recurrence of his back trouble.

Couples has remained as popular since joining the Senior PGA Tour, now called the PGA Tour Champions season, as he was when the American was World Number 1 on the regular PGA Tour. He was laid off with a back injury earlier this year, but he seemed to be fit again when he won the American Family Insurance Championship last month.

Unfortunately, his back flared up again this week, and so one of the few players with a shot at ending Langer’s bid to win a fourth consecutive Constellation is out.

Even though he’s only played in eight championships this year, as opposed to Langer’s 11, Couples is still lying third on the Tour Champions Money List, with $1,103,147 in prize money. His countryman Kenny Perry lies second, on $1, 225,385 from 12 tournaments, but Langer is streaks ahead on $1,815,666. If he wins the Constellation, the $420,000 winner’s purse will put him over $2-million, with half of the season still to play.

The 59-year-old started Thursday’s first round as the $4.00 favourite for the championship, and finished 7 under par at the end of the day. That left him tied in second place with the USA’s Corey Pavin and Steve Flesch, both outsiders in the betting.

Leading the Constellation after Round 1 was another US senior, Larry Mize. He shot a 64 to remain one stroke ahead of Langer, Pavin and Flesch, but as another $200.00 outsider, he’s going to struggle to hold off the German over the remaining three days.

A more likely threat to Langer may come from yet another two Americans: Brandt Jobe or Scott McCarron, both at $18.00. Jobe finished Round 1 tied in fifth with Scott Dunlap on 6 under, while McCarron managed a 5 under to tie for seventh with Ian Woosnam and Jim Carter.