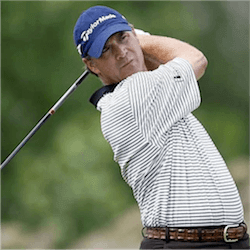 Bernhard Langer was hoping to celebrate his 60th birthday this August with another prime golfing record under his belt: four consecutive victories in the Constellation Senior Players Championship, one of the five majors in the PGA Tour Champions series for golfers over 50.

Many Australian betting fans were also backing the German legend, the favourite in the betting for the Constellation after he won it in 2014, 2015 and 2016. This year’s Senior Players Championship was held at Caves Valley Golf Club at Owing Mills near Baltimore, Maryland in the USA, from 13-16 July, and for the first 70 holes, it looked like Langer would be rewarding those backing him at $4.00.

However, a double-bogey after losing a ball in the water on Sunday’s 17th hole spelled disaster. Langer could have forced a playoff with a birdie on the 18th, but suffered the agony of his putt flirting with the lip, then staying resolutely unsunk to give him a par. American Scott McCarron finished one stroke ahead of him to clinch the title.

McCarron had a dream final round at the Constellation tournament, after starting the day six shots behind leaders Langer and Brandt Jobe. He put away six birdies to finish at a six-under 66 for the round, pipping Langer and Jobe by one stroke overall.

Aussie punters will be keen to see if the top five reshuffle their positions on the Money List again this weekend. The Senior Open Championship in Wales, at Royal Porthcawl Golf Club from Thursday to Sunday, is the next stop on the Tour Champions series. Langer won it in 2010 and 2014, and was the runner-up in 2103 and 2015.

However, Jimenez is currently top of the betting, at around $0.70, followed by Langer on even money and Scottish veteran Colin Montgomerie on $3.50.