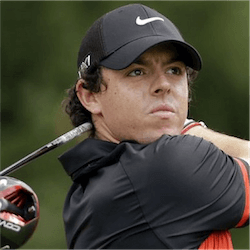 It seems that Rory McIlroy will have to rely on his best friend for emergency caddy duties for the final major of the year. This comes after the Irish golfer dismissed JP Fitzgerald after another unimpressive performance at the British Open. This week, Harry Diamond will be taking up the bag as McIlroy competes in the WGC Bridgestone Invitational. Diamond will also be the standing beside the world number 4 when he tees up at the USPGA Championship.

Ever since the infamous 2011 Masters, there have been calls for McIlroy to part ways with Fitzgerald. Five years down the line, it seems almost out of the blue that McIlroy has chosen this moment to end the relationship. At the Open Championship, McIlroy finished in a respectable 4th place. At Royal Birkdale, the Irishman had nothing but praise for his bagman who has quidded him to 4 Major titles and 18 other tournament wins in their 10 years together.

After recovering from a five over in the first round of the British Open, McIlroy once again praised Fitzgerald for his positively and support. Two days later, McIlroy was less flattering as his chances for a second Claret Jug went down the drain after a double bogy on the 10th. This was due to an incorrect club selection off the tee; a mistake that put the spotlight firmly on Fitzgerald.

Who Will Take Up the Bag?

The news of Fitzgerald’s departure has not garnered much sympathy. In fact, having earned over $NZ14m in his time with McIlroy, Fitzgerald was thought to be making too many mistakes for someone with that much responsibility. According to one caddy, the dismissal was inevitable. The Birkdale mistake was the last straw, forcing McIlroy to sever the bond.

A replacement for Fitzgerald is another matter altogether. Diamond could be the most obvious solution. A childhood friend of McIlroy’s, Diamond grew up in the same suburb in Belfast and is a pretty good player in his own right. He has also caddied for McIlroy before, back in 2005 when the Irishman was first invited to play at the Irish Open. The two have a very close bond with Diamond reportedly acting as best Man at McIlroy’s wedding.

There has also been speculation that Jim Mackay could take up the role after splitting with Phil Mickelson. Joe LeCava is another possibility. Being the caddy of Tiger Woods has meant that LaCava has not worked since February due to his employer’s issues on and off the course.