Outsiders Worth a Look in US PGA 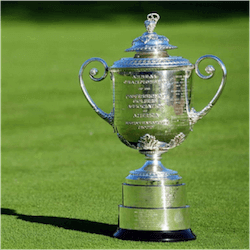 The last of the 2017 majors will be keeping Australian golf punters entertained from Thursday, when the US PGA Championship 2017 starts at Quail Hollow Club in Charlotte, North Carolina. Rory McIlroy, in pursuit of his third PGA Championship win, has edged ahead of World No. 2 Jordan Spieth in the betting, despite the Texan’s British Open win last month.

McIlroy is currently being offered at $6.50-$8.00 on online betting sites to win the tournament outright, with Spieth at $8.00-$10.00. But Spieth needs only this title to become the youngest golfer ever to win a career Grand Slam; he also has three majors’ titles as opposed to McIlroy’s four, so the contest between them could be entertaining spectators for years to come.

Although McIlroy and Spieth are favourites in the pre-tournament betting, anything can happen once players get out onto the 6,949m course, especially if the weather plays up. Phil Mickelson is a veteran who could always surprise; he’s playing in his 100th major at Quail Hollow, and has won 11 to date, including the PGA Championship in 2005. He hasn’t won a tournament since 2013, however, so he’s a long shot at $50.00 and up.

Another golfer who might be worth backing at long odds is Matt Kuchar, hungry for his first win in the majors and coming off an extraordinary runner-up finish in the British Open. He’s also being offered at $50.00 and up. Rickie Fowler hasn’t won a major yet either, although in 2014 he finished as runner-up in both the US and British Opens, and third in the PGA Championship. Ranked 10th in the world, the Californian is rated a bigger threat by the bookies than his countrymen Mickelson and Kuchar: Fowler is at $14.00-$18.00.

Two Spaniards in with a Shot

Online betting fans should also consider Spanish golfers Sergio Garcia and Jon Rahm when placing their PGA Championship bets. Garcia won the first major of his career with the Masters this year, so he’ll be itching to add another one to his 2017 haul; he’s at $33.00-$45.00 in the betting.

Rahm hasn’t won a major yet, but he has won two PGA tournaments this year, and he is shaping up to be a world golfing great. Betting sites are offering $20.00-$28.00 on him winning at Quail Hollow this weekend.