Presidents Cup Golf a Month Away 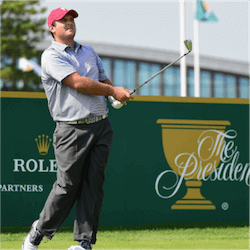 For sports betting fans unfamiliar with golf, the biennial Presidents Cup can be thought of as a Ryder Cup for the rest of the world. While the older PGA tournament pits a team of US players against a European team, the Presidents Cup, inaugurated in 1994, has the top US men’s golf stars facing off against an International team drawn from everywhere except Europe.

In 11 editions of the Presidents Cup so far, the USA has dominated overwhelmingly. The US team has failed to win the Cup only twice in the tournament’s history: first in 1998, when Australia’s Peter Thompson captained the International team to a resounding 20.5-11.5 victory over Jack Nicklaus’ Americans at Royal Melbourne Golf Club.

In 2003 at the Fancourt Country Club in George, South Africa, Gary Player led the International side and managed a 17-17 tie with another US team led by Nicklaus. For the past six tournaments, however, the USA has been unbeatable.

The 12th Presidents Cup starts on 28 September at Liberty National Golf Club in Jersey City, New Jersey. Non-playing captains this year are South African-born Zimbabwean Nick Price leading the International side, and Wisconsin’s Steve Stricker, who qualified as a senior player when he turned 50 in February, leading the USA.

A Look at the Teams

The Presidents Cup is a match play tournament, combining foursomes, four balls and singles matches. With the exception of two Captain’s Choice players in each 12-man side, teams are drawn from the Top 10 golfers, according to international rankings, in the USA and among the eligible International players.

Whether all these players will still be in the Top 10, and thus qualify for the Presidents Cup teams, at the end of the Dell Technologies Championship, however, remains to be seen.