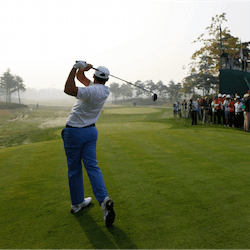 Australian golf fans will be considering a punt at online sports betting sites on the 12th Presidents Cup, due to be held at Liberty National Golf Club in New Jersey from 28 September to 01 October. The two non-playing captains are Nick Price for the International side, and Steve Stricker for the USA. Each has two captain’s picks to complete their 12-man teams, and both men are expected to announce their selections on Wednesday.

Punters will already have been checking out the form of the 20 players who have been confirmed for the Presidents Cup, at the Dell Technologies Championship, which finished on Sunday. The tournament marked the final cut-off for qualification via PGA Tour points in the Presidents Cup’s two team pools: the USA, and International, excluding Europe.

The final day of the Dell provided drama for American fans, as Kevin Chappell managed to finish the tournament a fraction of a point ahead of countryman Charley Hoffman, who till then had been in tenth on the US ladder. As a result, Chappell gets the tenth spot on the USA’s Presidents Cup team, and Hoffman is left hoping he’ll be a captain’s pick.

The other nine players who qualified for the US side include four golfers ranked in the PGA Top 10: World No. 1 Dustin Johnson, No. 2 Jordan Spieth, No. 6 Justin Thomas, and No. 10 Rickie Fowler. They will be joined in Jersey City by Brooks Koepka, Daniel Berger, Kevin Kisner, Patrick Reed and Matt Kuchar.

Canadian Adam Hadwin managed to finish the Dell with enough points to stay ahead of his biggest threat, Argentina’s Emiliano Grillo, in the Presidents Cup qualifier. As a result, the Saskatchewan 29-year-old claims the tenth spot in the International team, which is topped by the World No. 3, Japan’s Hideki Matsuyama.

The rest of the International team comprises South Korea’s Kim Si-Woo, Venezuelan Jhonattan Vegas, and three golfers each from Australia and South Africa. Jason Day, Adam Scott and Marc Leishman will be flying the Southern Cross, while Louis Oosthuizen, Charl Schwartzel and Branden Grace will be flying the Rainbow Y-Fronts.

The USA is the odds-on favourite to win the Presidents Cup for the tenth time, offered at less than $0.40 in outright futures betting. The International team is priced at $2.50 and above.