Pressure on US Presidents Cup Team 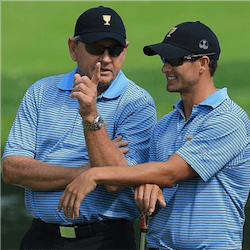 September 28 brings golf fans around the world the start of four days of top-notch international golf action, but the Presidents Cup is being written off by some punters as a no-contest tournament, made even less compelling this year by being held at the so-called ‘Worst Course on Tour’.

That’s a matter of perception, though, and not necessarily a fair one. It’s true that the USA has won the biennial event nine times in the 11 Presidents Cups played, and with three of their 12 players drawn from the Top 5 on the PGA Rankings, they’re favourites to win again this year. The downside of that, of course, is increased pressure on the whole team to excel against the underdogs.

Competition May Be Fiercer than Expected

But Dustin Johnson, Jordan Spieth and Justin Thomas are not invincible, and neither is 11-Presidents Cup veteran Phil Mickelson, the only golfer to play in every tournament since its inception. Non-playing skipper Steve Stricker’s US team also includes six rookies this year, and in the match play format, it will only takes a couple of upsets against the US top players by the more experienced golfers in Nick Price’s International team to bring about an upset.

The Internationals have enough in-form talent to pull it off, too. Si Woo Kim won the Players Championship earlier this year, and Aussie Marc Leishman is fresh from his victory at a Fedex Cup event in Chicago last week. Hideki Matsuyama is ranked at World No. 3, and Anirban Lahiri, Jason Day, Adam Scott, Louis Oosthuizen, Jhonattan Vegas and Emiliano Grillo are all golfers of prodigious talent.

Even the so-called ‘Worst Course’ now has a better reputation: after a minor revamp, players are starting to appreciate the mixture of seaside and country course features originally built into the 6,820m Liberty National Golf Club links by designers Bob Cupp and Tom Kite. It’s certainly better than the toxic waste-ground left on the Jersey Shore by the former oil terminal and ammunition dump that it replaced, now safely contained under an impermeable cap and several feet of soil and turf.

The course features spectacular views of Manhattan, New York Harbour, and of course, the Statue of Liberty overlooking the action. With the Internationals considered by some betting sites to be poor, huddled masses, they’ll be looking for whatever encouragement they can get. You can get in on the action at Crownbet and back the team you think wil take the Cup.