Rocco Mediate On The Complaints About U.S. Open Difficulty 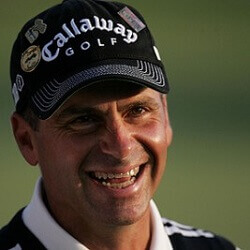 Rocco Mediate, one of current leaders of the 39th Senior Open has told reporters that he’s a fan of the USGA, praising both their championships and the courses that they put together.

The subject of the difficulty of Shinnecock has been all over the news in recent weeks, specifically the way the course has been set up by the USGA. Many golfers taking part in the U.S. Open this year have complained that the course is exceedingly difficult, and that much of the problems that golfers have been having is due to the way the Shinnecock course has been put together, and that the third round was particularly difficult.

Mediate, on the other hand, believes that his younger peers are in the wrong, and that their complaints were over the edge. He explained that what he’s been hearing from golfers on the course has made him want to throw up, adding that the point of the USGA courses is that they are meant to be difficult and challenging. He went on further to say that the courses are meant to be harder than what the golfers face at the test games before the event.

Mediate believes that the complaints about having the golf changed for the U.S. Open are unfounded, as the courses have always been changed to offer players a new set of challenges for every season, and that many of the players need to stop complaining and just play.