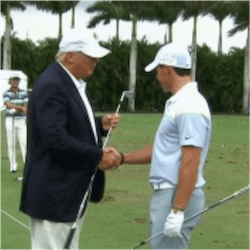 In one of the more unusual events that have occurred on a golf course, Irish golfer Rory McIlroy was invited to take part in a round of Golf. Nothing unusual there, you might be thinking, until you learn whom it was that gave the invitation. It was none other than controversial American president Donald Trump. McIlroy accepted the invitation, and one can only imagine the conversations that occurred as the two set about getting their golf balls onto the green.

The event caused a veritable torrent of controversy, and many are questioning if McIlroy should have agreed to the invitation. Trump is, of course, currently the focus of much anger and hatred across the world, largely due to the man’s opinions on delicate political subjects. It will not soon be forgotten the claim by Trump that a wall would be built between the United States and Mexico, and that Mexico would be paying for the wall.

McIlroy himself has not been a man particularly known for having any public opinion on politics, so the question is now being asked; why would he agree to such an unusual request? Opinions are varied on this topic, and both detractors and supporters of Trump have been quick to express their opinions on social media. Many of the opinions, predictably, have been foul mouthed, and a number of people have been calling McIlroy a supporter of one of the most hated presidents in the modern world. McIlroy has not, however, claimed to be a Trump supporter at all.

In one notable instance a highly respected journalist went live on Irish public radio, openly expressing his opinion that McIlroy had set the image golf back years. It is implied, in this case, that golf has once again been painted as a sport played by men such as Trump. That is to say, largely disliked men with loads of money, and, some would say, way too much power.

It should be noted, of course, that if McIlroy turned down the invitation, and the word got out, the controversy and backlash would likely have been just as bad, albeit of a different flavour. The golfer really had been put into a “no win” situation; with any decision he made resulting in opinions and accusations being thrown around. The invitation itself was, in one way or another, a sentence for McIlroy to face the public outcry.

There is no word as to whether McIlroy to Trump won the round of golf, but one can only imagine that the American president came up second best against a professional like McIlroy. There is also no word as to if the two will be making a habit of the golfing excursions.