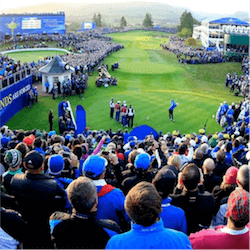 For the first time in the tournament’s history, the biennial Ryder Cup is scheduled to take place in France next year. The tournament, featuring the USA’s national golf team pitted against the best of Europe, will be played on the Albatros Course at Le Golf National in Paris from 28-30 September 2018.

European captain Thomas Bjorn and US captain Jim Furyk will start the tournament by teeing off from a special platform on the Eiffel Tower onto the Champs de Mars, recreating a moment in 1976 when Arnold Palmer became the only other golfer ever to play a shot from the Parisian icon.

One of the golfers in the team Furyk will lead at next-year’s Ryder Cup is likely to be Brooks Koepka. Last year, in his Ryder Cup debut, Koepka was one of the star players that helped the USA to its first victory in the tournament since 2008, with his personal score of 3-1-0.

This year, of course, golf betting fans are paying even more attention to the 27-year-old Floridian, as he has just won the US Open, his first major, at Erin Hills, Wisconsin. He was previously fifth in the US team’s Ryder Cup standings, but the victory has catapulted him into first place. It’s highly likely he will retain his spot in the 2018 US team.

Terrorism Fears Being Raised by Some

French authorities and the organisers of the 2018 tournament have dismissed any talk of the Ryder Cup being vulnerable to terrorism, but there are still fears being expressed in certain quarters. Retired Florida-based English golfing great Tony Jacklin is one of them, saying that if France appears by next year to be less secure against terrorist attack, the US team may consider pulling out.

However, others are dismissing these fears as politically driven, based more on an antipathy to the newly elected French government than a realistic assessment. With French authorities adopting a ‘keep calm and carry on’ approach to on-going security concerns, it’s more likely that the Ryder Cup will be like the hundreds of other sporting events hosted in France every year, and proceed without incident.