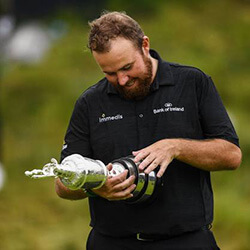 Irish Shane Lowry has earned his first major championship victory thanks to a six shot win on 15 under during The Open. Lowry has stared his celebrations early as he pushed through the crowds that had swarmed the 18th fairway in Northern Ireland’s Royal Portrush.

Lowry had held his nerve despite the rain and win and shot a one over 72, with Tommy Fleetwood second on nine under. English Fleetwood has been a threat for some time but a double bogey on the 14th removed his challenge as he finished with 3 over 74.

Talking about his win, Lowry stated that he couldn’t wait to wake up and find out what it’s gong to feel like and that it was going to be incredible. Thousands of partisan fans had attended the line at the 18th to cheer Lowry’s win procession and watched as he embraced caddie Brian Martin after hitting his second shot to the green. The audience then flooded the fairway in front of him to watch him take the next shot, and were lead by marshals under a rope to give them safe passage.

It’s a big change for Lowry after he added the US Open three years ago, and had also started the day with a four shot lead, but a 76 saw his chance of winning fall away as Dustin Johnson took the victory for the event. American Tony Finau carded a one over par 71, and ended in third place on seven under.