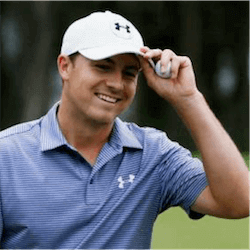 When Jordan Spieth won the 2017 British Open four days shy of his 24th birthday, he did more than leapfrog Hideki Matsuyama into second place on the PGA World Rankings. He also became the only golfer apart from Jack Nicklaus who has won three different majors at the age of 23.

The Texan now goes into the 2017 US PGA Championship, starting at Quail Hollow Club in Charlotte, North Carolina on 10 August, with a shot at becoming the youngest player to win all four majors. Tiger Woods was 24 years, five months and some days old when he set the record with his magnificent 2000 US Open win, but if Spieth emerges victorious on 13 August, he will be just 24 years and 17 days old.

A US PGA title would also make the Dallas prodigy one of only six men who have completed career Grand Slams since 1934, but in interviews Spieth appears as unfazed by the upcoming challenge as he was by his disastrous upsets in the final round of the British Open. Despite five bogeys, he fought back to one-under with four birdies and an eagle, leaving him the overall winner by three strokes at 12-under.

World No. 1 Dustin Johnson is still not 100 per cent recovered from the back injury he sustained in a fall before the Masters. He finished tied at a disappointing 54th in the British Open. As a result, he is only third favourite to win the 2017 US PGA, at $7.50 and above.

Not surprisingly, Spieth is currently topping the betting for the Quail Hollow tournament, at around $7.00. But he isn’t the only favourite: Rory McIlroy is being offered at the same odds. The Northern Irishman, currently ranked World No. 4, finished the British Open tied in fourth with Spaniard Rafa Cabrera-Bello, seven strokes behind Spieth.

McIlroy still needs a Masters victory to take the career Grand Slam, but he won the US Open in 2011, the British Open in 2014, and the US PGA Championship in 2012 and 2014. He also has 12 more Top-10 finishes in the majors, whereas Spieth has only four, to go with this year’s British Open title and the Masters and US Open championships he won in 2015. The two are likely to provide exciting betting options for Aussie punters as they battle through the rounds at Quail Hollow.