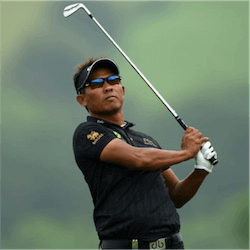 Thongchai Jaidee will be defending his title at the HNA Open de France against a robust field this week outside Paris at Le Golf National.

A remarkable field is set to assemble this week when the 101st running of the HNA Open de France begins. Jaidee will be defending it, and Jon Rahm, Martin Kaymer, Alex Noren and Tommy Fleetwood will all be playing. Punters looking to get in on the action can do so at Ladbrokes, where they’ll find great odds for this event.

As the 2nd event in the opening Rolex series, the HNA Open de France has a large purse attached, and this has managed to attract first-rate players. Bern Wiesberger, the 2015 French Open winner, will be there, as will Lee Westwood, Thomas Pieters, Chris Wood, Russell Knox, Danny Willett, Matt Fitzpatrick and Andy Sullivan.

The History of the French Open

The French Open is the oldest one to take place on continental Europe, and was first contested in 1906 at La Boulie. Arnaud Massy won that contest, and went on to do so 3 times, with the last occurrence happening in 1925, when Massy was 48.

The HNA Open de France has been appearing on the European Tour schedule since 1972, and is considered to be 1 of the most prestigious to do so. It has been previously won by Nick Faldo, Colin Montgomerie, Seve Ballesteros, and Greg Norman, among others, and Thongchai Jaidee took 1st place last year, with Francesco Molinari just behind him.

Le Golf National Near the Palace of Versailles

The Le Golf National course was designed on a piece of flat farmland located nearby the famous Palace of Versailles, and architect Hubert Chesneau started construction in 1987. By 1990 the course was ready for play, and this year’s event will mark the 25th time that the course has been made use of to host the Open de France.

Unfortunately the weather forecast is less than perfect, with rain likely to fall on the tournament’s 1st 3 days. The tournament is set to run from the 29th of June through to the 2nd of July, and players will be aiming for the purse of US$7 000 000.

Tommy Fleetwood is the player to watch during this tournament. Currently standing at 2nd place on the Race to Dubai, he has been enjoying an excellent season. He took 1st place in Abu Dhabi, placed 2nd in the WGC-Mexico Championship, came in 4th at the US Open, and tied for 6th place in Germany last week.