Tiger Woods Heading Into US Open In Good Spirits 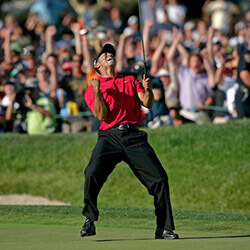 Tiger Woods has told reporters that he was confident going into the US Open after his recent successes. Woods recently rose to 67th in the world after his performance at Quicken Loans International, where he finished fourth, just behind Francesco Molinari. It was also the first time that an Italian had won while on the PGA tour in 71 years, marking the event as something special.

The 42-year-old golfer, who was once the top player in the world, has not seen a win at a major golfing event since 2013. Despite this, Woods believes that he will be able to be a serious challenger in the upcoming games that are set to be held at The Open, which is being held in Britain.

The player is well aware of what to expect at the British major, and has been working on doing well at the event, preparing from his home in Florida. He has seen some success in the past in The Open, having come in 7th at Carnoustie in 1999 and 12th in 2007. He also played at the Scottish Open in 1995.

His recent interviews had him referencing the US Open and the problems the event has been having at Shinnecock. He told reporters that The Open organisers don’t try and manufacture an event, rather letting the weather direct how the games work. The US Open has been plagued by USGA decisions, leaving some parts of the event unplayable.