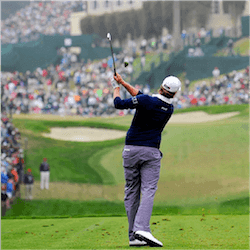 Australia’s golf fans hoping to get their online bets on for the 2017 US Open at Erin Hills from 15-18 June are still awaiting the announcement of the final field for the second major of the year. In the meantime, a look at the players already qualified for the tournament reveals plenty of A-List talent in the running from the top of the PGA rankings.

World Numbers 1 and 2, Dustin Johnson and Rory McIlroy, make the grade as two of the US Open Champions of the past 10 years. The same criterion applies to World No. 7 Jordan Spieth, and World No. 9 Justin Rose. Other former champions eligible for the Open are Martin Kaymer, Webb Simpson, Angel Cabrera, Lucas Glover and Graeme McDowell.

Australia’s Jason Day, the current World No. 3, qualifies for the Open as one of the PGA Champions of the past five years. He won the PGA Championship in 2015, and his most recent victory was in May last year, at the Players Championship at PTC Sawgrass in Florida. Adam Scott is another Australian star eligible for the Open, thanks to his 2013 Masters win at Augusta. He is currently ranked World No. 8.

Japan’s Hideki Matsuyama, Swede Henrik Stenson, Spain’s Sergio Garcia and American Ricky Fowler, respectively World Nos. 4, 5, 6 and 10, are also on the list of golfers qualified for the 2017 US Open, so punters are assured of tightly fought action in Wisconsin.

There are two significant tournaments before the Open that will allow online betting enthusiasts to appraise their favourites’ current performances and fitness. The BMW PGA Championship in England runs from 25 to 28 May, followed by the Memorial Tournament from 1 to 4 June, hosted by Jack Nicklaus at the Muirfield Village Golf Club in Dublin, Ohio.

The bad news for fans of Rory McIlroy, is that the Northern Irishman has already pulled out of the BMW PGA Championship as a result of a recurring rib injury. He might be fit again in time for Ohio, but he could well go to the Open without a prep tournament at all.