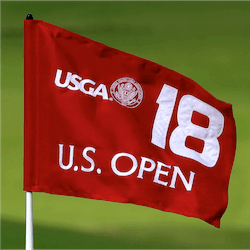 Johnson the Favourite in US Open Championship

Defending champion Dustin Johnson is the favourite at the start of the 2017 US Open Championship at Erin Hills in Wisconsin. The US golfer is being offered at $7.25, so sports betting enthusiasts are expecting big things from him after his abortive departure from the Masters. Prior to his fall down a staircase in Augusta, the World Number 1 had three consecutive wins from seven tournaments in 2017.

Johnson faces plenty of competition in Wisconsin, however, even if this is the first major since the 1994 Masters at which neither Tiger Woods nor Phil Mickelson is playing. Jordan Spieth is being offered at $9.00. The World No. 5 has had a patchy start to the year, but his AT&T Pebble Beach Pro-Am win in February made him the second golfer, after Woods, to win nine PGA Tour titles before the age of 24.

Australian-born Ohian Jason Day is the third favourite at $11.00, and in typical style he’s made light of other golfers’ complaints about the record length of the course, the condition of the rough, and the forecast bad weather from Friday. The hardships will only make him more focussed, he says, and he’s keen to secure the second major title of his career, after finishing as the runner-up in the Open twice: in 2011 and 2013.

Former Open champions Justin Rose and Rory McIlroy are also among the top seeds, as are American Rickie Fowler and Spain’s Jon Rahm. All four are priced at $20.00 or less.

In light of the wet, windy weather predicted for the last three days, punters should expect a few surprises at the 2017 Open. Betting fans might want to look at Brandt Snedeker and Tyrell Hatton, both at $100. They specialise in hitting long, straight drives, which will be useful on the 2017 Open’s record-length course.

Jason Dufner is priced at $50.00, but in the past three US Opens, he is one of only three golfers who finished in the Top 10 every time. The other two are Johnson and Day, so if he catches the right break at the right time, the Duf could be a contender.