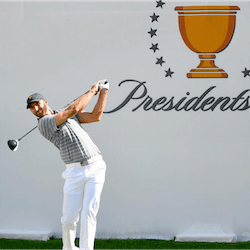 Thursday saw the start of the 12th Presidents Cup, held this year at Liberty National Golf Club, New Jersey, in a day of foursome matches. Players were kept busy trying to keep shots on course in the fierce wind, leaving many shots falling short of greens.

The wind took its worst toll on Internationals Adam Scott and Branden Grace, playing in separate foursomes: both overshot the par-3 10th green to land in a hazard. The USA Team went into the 2017 tournament the odds-on favourites to take another title, and they started Day 1 looking hard to beat.

Three Up in No Time

The first foursome to tee off saw the USA’s rising stars Justin Thomas and Rickie Fowler paired against Internationals Hideki Matsuyama and Charl Schwartzel. In a quick, convincing display of superiority, the US team took a 6 and 4 victory in just 14 holes. Jordan Spieth and Patrick Reed, considered by some the best team-event pairing on the Tour after their 2-1-1 score at last year’s Ryder Cup, added another win to the US tally, beating Kim Si-woo and Emiliano Grillo 5 and 4.

The first match to go the full 18 holes was between Internationals Adam Scott and Jhonattan Vegas and the USA’s World No. 1 Dustin Johnson and Matt Kuchar. The Americans took a one-up win, as well as the distinction of playing the first round of the day without a bogey.

A Loss and a Draw to Close

With the Americans clearly dominant, there was a danger that this year’s Presidents Cup could turn out as one-sided as critics questioning the relevance of the tournament had predicted. The South African duo Louis Oosthuizen and Branden Grace rode to the Internationals’ rescue, however, against Daniel Berger and Brooks Koepka.

The match ended after 17 holes, with the Internationals winning 3 and 1. In the final foursome of the day, with Aussies Jason Day and Marc Leishman playing Presidents Cup veteran Phil Mickelson and rookie Kevin Kisner, the USA were within an ace of winning, until Mickelson missed a four-foot putt on the 18th.

The match was halved, leaving the Americans victors of the day, with an overall score of 3.5 to 1.5. Now it remains to be seen if the Internationals can shift the balance a little in the four-balls.