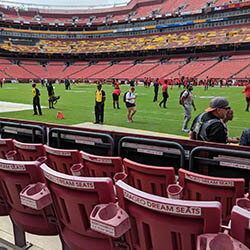 When the Dallas Cowboys go up against the Pittsburgh Steelers at the first preseason game on the 7th of August, fans will be able to view everything from stadium seats thanks to their being allowed in the stands. Dream Seats are not an option however, as the National Football League will be blocking off the first six to eight rows of every section of the lower bowl. This is part of the ongoing effort to minimise and contain the threat of the ongoing novel coronavirus COVID-19 pandemic.

Ben Fischer, of the Sports Business Journal, explained how things will look if nothing’s changed by that date, with these areas being tarped off completely. Teams will be given the option to sell signage to interested sponsors who wish to see their names up on TV screens as the games unfold.

The Sports Business Journal has let it be known that the tarp-covered seats will be a familiar sight to those of us who enjoy watching English Premier League games. The season resumed recently, but no fans have been allowed to watch games live. It’s been reported that the NFL will not be placing a limit on game capacity, saying that each of the teams will make this decision themselves.

An anonymous source inside the NFL has said that attendance will be decided on state-by-state and county-by-county since it’s impossible to make a workable one-size-fits-all rule right now. Both the Washington Redskins and the Baltimore Ravens recently revealed that they plan to follow state and local regulations when it comes to deciding how many tickets, if any, to sell for home games.