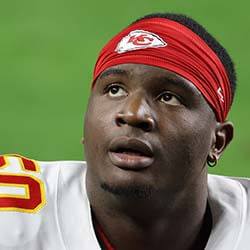 KC Chiefs linebacker Willie Gay Jr. may not play in the team’s upcoming game against the Buffalo Bills in the Playoffs. This after Gay was arrested this week on a charge of damage to property. Police confirmed the arrest on Wednesday.

The star reportedly broke a vacuum as well as several other household items during an argument in Overland Park, Kansas City. No one was injured during the altercation, and no drugs or alcohol were involved, police have confirmed.

According to Gay’s agents, Ryan Rubin and Maxx Lepsettler, the argument occurred during the player’s visit to his son. Police were called by the mother of the child.

The 23-year-old was reportedly released from the Johnson Country Detention Center on the same day of the arrest. He pleaded not guilty to the charge against him. According to his agents, the likely outcome will be payment for the damages caused and a fine.

According to Kansas City defensive coordinator Steve Spagnuolo, it remains a matter of wait-and-see regarding the upcoming game. Gay was absent from practice on Thursday. Spagnuolo said a possible absence will be treated exactly as would an injury on the day.