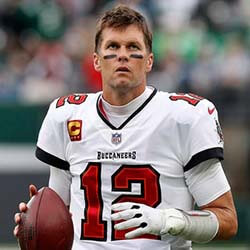 Reports suggesting that he may be ready to retire aside, Tampa Bay QB Tom Brady (44) has informed the Buccaneers that he hasn’t yet fully made up his mind.

According to two sources reportedly familiar with the inside scoop, Brady indeed remains undecided about his next step. The two people indicated that Brady had called Buccaneers GM Jason Licht and had told him that he has not yet made a final decision regarding his plans for the immediate future.

The star QB’s supposed retirement plans first hit Twitter on the weekend after a health and wellness company owned by Brady tweeted about a likely decision to step down. The tweet was however later removed.

Brady, meanwhile, remains under contract for 2022. Even so, he has on numerous recent occasions expressed a desire to spend more time with his wife and three children.

According to Brady’s agent, Don Yee, the Tampa Bay star can be expected to make an announcement regarding the matter soon. In his own statement released on Twitter, Yee said since Brady knows the realities of football as a business, he can be expected to have the necessary regard for the planning calendar.

Several pundits have now suggested that Brady may have planned to announce his retirement after this year’s Super Bowl, and that the initial tweet may have been sent out prematurely.

Brady is one of the NFL’s best. He won six Super Bowls during his time playing for the New England Patriots. After joining the Buccaneers in 2020, he led the franchise to it’s second Super Bowl win.