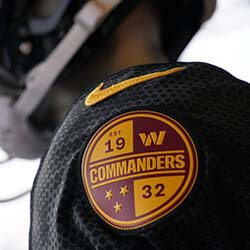 After an 18-month search for a befitting and inclusive new name, the franchise will henceforth be known as the Commanders.

In July 2020, the Commanders dropped their old name after pressure from sponsors regarding its racist nature towards Native Americans. Other names considered by the team included Sentinels, Defenders, Presidents, Red Hogs, Brigade, Admirals, and Armada.

The idea had been to incorporate a military theme in the team’s name, explained team president Jason Wright and coach Ron Riviera this week. The name also bears reference to the American president, who is typically referred to as the commander-in-chief, they said.

According to a team statement, the name is furthermore meant to pay homage to the most notable aspects of the team’s history.

The new name is a momentous occasion for Washington fans, said Ray Halbritter, who is the nation representative and CEO of Oneida Nation Enterprises. Local fans have a desire to love and support a team, he said, which they’ll now be able to do with passion since they’ll no longer be subjected to harmful and offensive language and connotations.

Washington had been the team to lead the way in terms of moving away from Native American imagery. They were followed by Cleveland (MLB), who are now known as the Guardians.

But the new name is about more than just inclusivity. Following a daunting couple of years and not much success on or away from the field, adopting a new moniker marks the turning over of a whole new leaf for the Commanders, said Riviera.