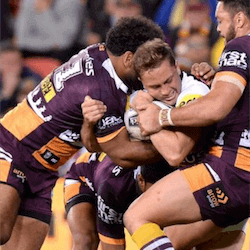 The Brisbane Broncos may have hammered the finals nails into Canterbury’s coffin after they crushed them 42-12. The two teams met at the Suncorp Stadium and they had the crowd on their feet. Canterbury’s finals hopes are just about dead in the water after the stunning loss.

The Bulldogs had to win this game and they definitely seemed to be in the right headspace. The team came out with their teeth bared and nailed the first try thanks to powerhouse Marvelo Montoya. Montoya just took 6 minute to capitalise on a shaky Brisbane defence.

Six tries against them later however, all their opening bluster was lost and replaced with anguish as more than 24 000 fans had to see them take the crushing defeat home.

The Bulldogs simply did not have the necessary possession in the second half to turn their fortunes around. Many fans did not see Brisbane performing this well, post Origins, but they definitely seemed back in form despite concerns that they could not back up their first 5 day turnaround.

Canterbury Out Of Top 8 Chance

Canterbury is now stuck in 13th place on the ladder, 4 points behind the top 8 competitors and with only 6 rounds to play. It would take a miraculous improvement in form to make up the deficit now and move into the top 8.

Brisbane did have a slow start, seemingly feeling out Canterbury before they well and truly sunk their teeth in. Tautaui Moga, with the assistance of Andrew McCullough, scored the levelling try in the 22nd minute. Another three tries followed, powered by Ben Hunt and Jordan Kahu, ending the first half on 16-6.

When play commenced, Brisbane smelled blood and they did not pull any punches. Another three tries were taken by Josh McGuire and Kody Nikorama within 76 minutes of each other and the match was well and truly over. They literally ran circles past the poor Bulldog defensive line.

You can’t help but wonder what this decisive loss holds for coach Hasler. Social media has been abuzz with calls for his resignation. With this season already a washout for Canterbury, there may be a few stern talks back at HQ over his future with the team.

He has not made up for or addressed his side’s lacklustre performance, despite the talent present. This game was another demonstration that there is a definite lack of motivation and direction within Canterbury that will need to be addresses.