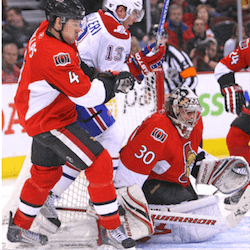 Ice hockey fans joined Canada to celebrate its 150th anniversary at the NHL 100 Classic on December the 16, which was also dedicated to local sesquicentennial festivities. A rare outdoor fixture, the NHL 100 Classic had a great hockey weather forecast for the Saturday, with Ottawa expecting light snow and temperatures below freezing.

The Landsdowne Park match was at the nexus of multiple important anniversaries on Saturday, including the NHL’s Centennial Celebration, the 125th birthday of the Stanley Cup, and the 25th anniversary of the resurrected Ottawa Senators, a founding NHL franchise that left Canada in 1934 for St Louis, Missouri, and folded two years later, only to be revived in 1992.

And fittingly, considering that the NHL’s founding in 1917 is one of the anniversaries being celebrated, the teams playing the NHL 100 Classic were a rematch of the first teams to meet in the 1917 season: the Senators and the Montreal Canadiens.

The first NHL match, on December 19, 1917, was also held in Ottawa, in the Dey Arena. It was the Senators’ home rink at the time, but home-crowd advantage counted for nought. Canadiens’ forward Joe Malone was the star of the night, putting away two goals in the first period, one of them unassisted. His teammate Newsy Lalonde added another.

In the second period, Cy Denneny scored twice and Eddie Gerrard once to give the Senators three goals of their own, but another two from Malone, assisted by Joe Hall, kept the Canadiens ahead. Malone claimed his fifth goal in the third period and teammate Didier Pitre put another one away to clinch it, while Denneny’s third goal was small consolation for Ottawa. The final score was Montreal : 7; Ottawa: 4.

Saturday’s match-up saw the 100 year circle come to a close, but not in the way many fans would have liked. This time around the Senators beat the Candiens a whopping 3-0, leaving them wondering what had hit them, and spectators wondering the same! Here’s hoping it won’t take another 100 years before these two teams get a rematch.