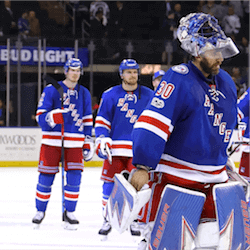 Rangers Go Down to Blackhawks at Home

Ice hockey fans have been given a bit of a rollercoaster week by the New York Rangers. Wednesday night was a downer, when the Metropolitan Division team lost to the Chicago Blackhawks at home in Madison Square Garden.

It was a welcome relief for the Blackhawks, who were languishing at the bottom of the Central Division, a point behind the Colorado Avalanche, on Wednesday morning. They beat the Rangers by 5 goals to 2, with three of the Blackhawks’ winners coming in the third period.

Chicago goalkeeper Jeff Glass, starting for the Blackhawks for the third time in a row, stopped 23 Rangers shots at goal. At the end of the first period, the Rangers were two goals to nil up, which throws some light on just how effectively the Chicago team came back; Australian punters should keep an eye on them for a possible late-season revival.

The result was a cruel blow to Rangers fans, bringing them down to earth with a bump just two days after an exhilarating victory outdoors for the New York team.

The NHL Winter Classic started as a novelty, and has turned into a hockey tradition ringing in the New Year. On Monday, the 10th annual Winter Classic was played outdoors at the Long Island baseball arena that is home to the New York Mets: Citi Field in Queens.

For the NY Rangers from Manhattan, it counted as home ground, with the Buffalo Sabres the designated visitors. The home side, playing in their first NHL Winter Classic, had it all there own way in the first period, with goals from Paul Carey and Michael Grabner leaving them 2-0 up in the first break.

The Sabres, who played in the inaugural 2008 Winter Classic but lost to the Pittsburgh Penguins, came back within the first minute of the second, with Sam Reinhart putting one away. Rasmus Ristolainen scored the equaliser for the Sabres 27 minutes into the third period, and the two sides were still tied at full time.

Less than three minutes into overtime, JT Miller got the puck in the net for the Rangers, and the New York side hung on to seal a 3-2 victory.