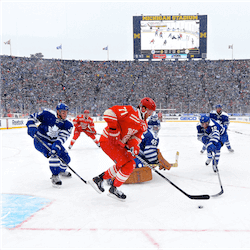 When the Buffalo Sabres took on the Pittsburgh Penguins in the first NHL Winter Classic at Ralph Wilson Stadium on January 1, 2008, a lot was at stake.

If the weather gods had decided not to provide reliable snow, or the viewing fans had decided an outdoor regular-season ice hockey match to start the New Year was a silly fad, the idea could have flopped. Winter Classic originators the Sabres and the NHL, along with their broadcast partner NBC, could have ended up with egg on their faces.

Instead, any meteorological deities in the neighbourhood cooperated, viewers loved the outdoor hockey concept, and a new highlight of the NHL season was born. Ten years later, it’s still going strong.

The Sabres are back to play in the game’s 10th anniversary. The stadium for their inaugural game against the Penguins was at a neutral comparable distance from both Buffalo, New York and Pittsburgh, Pennsylvania. The Penguins eventually won that game 2-1 in a shootout, in front of a crowd of more than 71,000; at the time an NHL record.

This time round, the Sabres’ opponents start off much closer to a homeground advantage: the Manhattan-based New York Rangers simple have to cross the East River into the borough of Queens. Despite hailing from the same state, Buffalo are definitely going to be the out-of-towners when they arrive at Citi Field baseball park in Flushing Meadows on January 1, 2018.

From an untried gimmick ten years ago, the Bridgestone NHL Winter Classic has now grown to being one of the most-watched hockey events on NBC, with a show that has expanded beyond the on-field action.

This year, the band entertaining the fans in the first intermission will be the Buffalo-based Goo Goo Dolls. It will be the Grammy nominees’ second NHL performance; they also appeared at the 2010 NHL Awards.

With a Bufalo band playing heart into the Sabres before the second period, no doubt Rangers fans will want a solid New York City outfit to entertain them in the second intermission. That act had not yet been announced by the NHL at the time of writing.