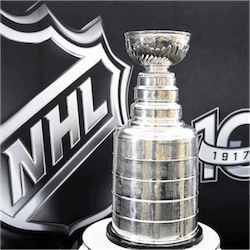 Australia may not be counted among the world’s ice hockey giants, but plenty of Aussie sports fans enjoy watching the game and punting on it via online betting sites. North America’s National Hockey League offers all the most exciting action, and the highlight of the hockey year is approaching in June: the NHL’s Stanley Cup Finals.

The first round the NHL Play-Offs, to determine the individual champions in the NHL’s Eastern and Western Conferences, was completed on 22 April. The Play-Offs are the knockout stage of the competition, and the first round featured 16 teams: the eight sides at the top of each conference ladder after the regular season.

Eight teams survived to go into the second round, from 26 April to 11 May. The two teams at the top of each conference then compete in the Conference Finals, to be crowned Conference Champions, in the final two weeks of May.

Once both Conference Champions are decided, the two teams meet in June’s Stanley Cup Finals, which like all the Play-Offs rounds consists of up to seven games.

First Round Decided in Six or Fewer

None of the teams victorious in the first round of the Play-Offs needed all seven games to secure their win. Two Western Conference sides made the next round in four straight victories: wild cards the Nashville Predators and Pacific Division champs the Anaheim Ducks. They secured 4-0 wins against Central Division champions the Chicago Blackhawks and wild cards the Calgary Flames, respectively.

The other four teams through to the second round all won their first-round encounters 4-2. In the Eastern Conference, the Ottawa Senators beat the Boston Bruins, Metropolitan Division champions the Washington Capitals beat the Toronto Maple Leafs, and wild cards the New York Rangers defeated Atlantic Division champs the Montreal Canadiens.

In the Eastern Conference, the Edmonton Oilers won a 4-2 victory over the San Jose Sharks. For Aussie punters rooting for a Canadian side to make it all the way to the 2017 Stanley Cup Finals, this makes the Oilers and the Senators the teams to watch in the second round of the Play-Offs.