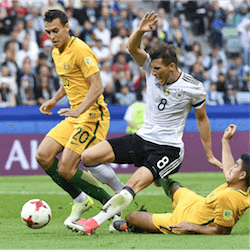 Australian soccer fans were disappointed by the Socceroos’ 3-2 loss to Germany in their first match of the 2017 Confederations Cup in Sochi, Russia, on Monday. On Sunday in Moscow, Chile beat Cameroon 2-0 in the opening match of Group B, so Chile is now ahead of Germany on goal difference. With three points each, the two sides are topping the group, and both are on track for a quarter-finals berth.

To stand a chance of unseating one of them, Australia now has to win both their remaining group matches against Cameroon and Chile. They would also need to win well enough to ensure their goal difference exceeds that of whoever loses the Chile vs Germany match in Kazan on Thursday, presuming that game doesn’t end in a draw.

Of course, Cameroon could also do the Socceroos an unlikely favour against Germany in Sochi on Sunday, so nothing is written in stone yet. All that is certain, is that the chances of Australia making the quarter-finals are slim, but not impossible, if the team delivers a couple of outstanding performances.

The Australians’ proactive, positive approach against the Germans almost paid off, but the team was let down by an inability to hang on to possession, which coach Ange Postecoglou will be working on this week. They were also disheartened by an early goal, scored by Germany’s Lars Stindl in the fifth minute.

Aussie hopes brightened when attacking midfielder Tom Rogic put away an equaliser in the 41st minute, but a Julian Draxler penalty three minutes later put the Germans back ahead. Australia’s fate was sealed with another goal from Leon Goretzka in the 48th minute, and despite a 56th-minute answer from the Socceroos’ Tomi Juric, Germany held onto their lead for the rest of the match.

It’s do-or-die for the Socceroos on Thursday night, when they will face Cameroon in Saint Petersburg. This is the match that bookies reckon Australia has the best chance of winning. However, their biggest test will come on Sunday, when they face the might of Chile in Moscow. The South American side is the second-highest ranked team in the tournament, after Germany.