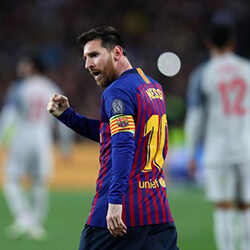 Lionel Messi proved to be the man of the match at the latest Champions League game that saw Barcelona pitted against Liverpool. Messi claimed two goals during the second half, which included an incredible free kick that gave Barcelona the advantage, and left Liverpool in a bad state of their Champions League semi final.

The Reds were n the lead despite having to go behind to Luis Suarez’s strike that he fired off in the first half, but the game quickly changed thanks to the double goal by Barcelona’s number 10.

The Argentinian forward had an otherwise uneventful first half after following up the shot from Suarez that came off the bard. This changed for the second after he found a top right corner form Alisson and put his team into the lead, and marking his 600th goal for the Spanish side.

Liverpool came extremely close to a goal thanks to a strike from Roberto Firmino that was cleared off the line before Salah sent the ball into the post rather than claiming a goal through the follow up. Ousmane Dembele of Barcelona could have thrown the score out of the Premier League squad during the final seconds of the game, but he sent it straight at Alisson from a few yards and was ultimately denied. It’s another game for the Reds that have ended on a bad note this season, who have lost the away leg of their past six European semi final matches.