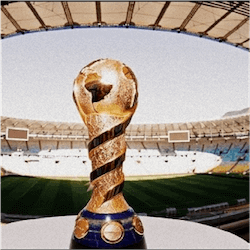 On Thursday night, Germany secured their spot in Sunday’s FIFA Confederations Cup Final in the eighth minute of their semi-final against Mexico. Such was the valour of El Tricolor, however, that it took the Word Cup champions another 51 minutes to lock down the win.

Wednesday’s semi-final, between Chile and Portugal in Kazan, was a very different kettle of fish. The young, successful Chilean side were not in the least overawed by Ronaldo, with Eduardo Vargas and Charles Aranguiz showing attacking skills to equal those of the Portuguese legend. But the real stars of the night were goalkeepers Claudio Bravo for Chile and Rui Patricio for Portugal.

Both keepers defended like tigers, coming off the line several times to avert disaster, and stopping a number of shots each. It was thanks to their efforts that the match went 90 minutes without a goal from either side. That tenacious impenetrability continued through 40 minutes of extra time, leaving the score still 0-0.

In the penalty shoot-out, Bravo emerged a hero, stopping three in a row from Ricardo Quaresma, Joao Moutinho and Nani. Arturo Vidal, Aranguiz and Alexis Sanchez, in turn, rocketed three past Patricio, putting the Chileans through.

Germany Too Good for Mexico

The Germany vs Mexico match in Sochi’s Olympic Stadium gave the big crowd just as much thrilling action in the goalmouth as the first semi, but with more shots getting through. Mexico was stunned by two brilliant goals in the sixth and eighth minute, put away by Leon Goretzka after some slick attacking teamwork.

Rather than being disheartened, however, El Tricolor came back fighting tirelessly for the rest of the match. Once they settled down after their shaky start, they attacked dangerously for the final 25 minutes of the first half. Despite some good chances, though, they were constantly denied by shots flying high, wide, into the woodwork, or into the safe hands of Marc-Andre ter Stegen.

When Timo Werner put a third goal past Guillermo Ochoa in the 59th minute, it was all over, but that didn’t stop the Mexican attack. Ter Stegen and the Germans held out, however, and Chile had to be satisfied with a consolation goal by Marco Fabian in the 89th minute. In the first minute of stoppage time, though, Amin Younes slotted a final goal to give Germany the 4-1 win.

As Germany and Chile head to Kretovsky Stadium, Mexico will meet Portugal for the third-place playoff in Moscow on Sunday.