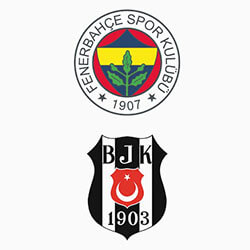 Struggling Fenerbahce surprised their Istanbul opponents Besiktas to come back from 3-0 down for a 3-3 draw, earning a point in their battle to avoid being relegated from the Turkish Super Lig. Fenerbahce, who are nineteen time champions, and finished in second place last season, trailed behind due to goals from home duo Gokhan Gonul and Burak Yilmaz after 18 minutes.

Yilmaz went on to added a penalty during stoppage time before Fenerbahce, who had just brought on former French midfielder Mathieu Valbuena and on-loan Swansea forward Andre Ayew for half time, turned the game around with three goals in 12 second half minutes. It was a half time team talk from Ersun Yanal that seemed to turn around as the visitors went on to the field as a completely different team by the time the end of the break, and quickly started playing more tactfully and aggressively.

Miha Zajc was the first to fight back on 55 minutes, followed by Sadik Ciftpina and Hasan Ali Kaldirim also scoring past Liverpool keeper Loris Karious, completing a stunning turnaround for the team. Neither side managed to end with a dramatic win, despite there being a further 10 minutes of injury time. Fenerbahce will now be moving up to fifth after having been at the bottom, which makes them a point clear of safety. Meanwhile, Besiktas, who are now third placed in the table, will remain eleven points adrift of current leaders Istanbul Basaksehir.