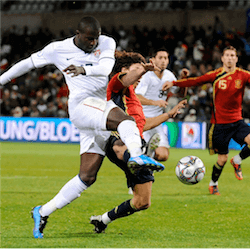 Saturday sees the kick-off of the 2017 FIFA Confederations Cup in Russia. It’s not the World Cup, but it is a darn fine curtain-raiser to next year’s high-profile tournament, and of course the 2017 Confederations Cup results could have a bearing on some teams’ chances of qualifying for the 2018 event.

The Russian hosts have split the torunament over four cities: Moscow, St Petersburg, Sochi and Kazan. The first match of the 2017 Confederations Cup will feature the hosts against New Zealand, in St Petersburg’s Kretovsky Stadium, on Saturday at 6pm local time.

The hosts are crambling to ensure that the facilties and security would be of the highest standard. Russia is also set to host the World Cup next year, so the Confederations Cup is very much a trial run. Organisers want to demonstrate to players, fans and the world’s football confederations that they are up to the job.

In nine previous Confederations Cups, Australia has only qualified three times. The most recent appearance of the Socceroos at the tournament was in Germany in 2005, but they were bundled out after three losses in the first round.

So Australian soccer fans were thrilled to see them qualify this year, and they will be hoping the team can repeat, or even better, the heroics of 1997, when they finished as the tournament runners-up to Brazil. However, the Socceroos are missing skipper Mile Jedinak, who has been plagued by a groin strain for some time. James Jeggo will replace him at the helm in Russia.

Australia’s first match of the tournament is against Germany at Sochi’s Olympic Stadium on Sunday.  They then play their other Pool B opponents next week: Cameroon on 22 June in St Petersburg, and Chile in Moscow’s Otkrytiye Arena on 25 June. If the Socceroos can finish in the Top 2 in their group, they advance to the knockout stages.