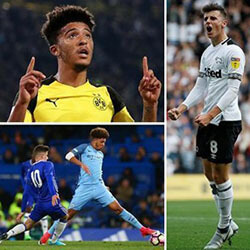 Teenage players Mason Mount and Jadon Sancho have been included in Gareth Southgate’s England team as they get ready to face both Spain and Croatia later in October. Leicester midfielder James Maddison has also been called to to the senior squad for the first time ever, while Ross Barkley has been recalled. There have also reportedly been call-ups for Tottenham’s Harry Winks, and Watford’s Nathaniel Chalobah.

Sancho, who former played for Manchester City, has so far recorded one goal and five assists for Borussia Dortmund so far this season, even though the 18-year-old only saw 125 minutes on the field. Mount, 18, who played as Derby midfielder, was watched during his Championship match where they took on Blackburn while on loan from Chelsea.

The current 25-man squad now has a total of six players who have yet to earn a senior cap, which includes Chalobah, and goalkeepers Alex McCarthy and Marcus Bettinelli. After the changes made to the squad, there is no longer any space available for midfielder Ruben Loftus-Cheek, while Jesse Lingard and Dele Alli have to miss out due to injury.

England are set to take on Croatia for the UEFA Nations League behind closed doors at Rijeka, around the same time where the World Cup finalists will complete a ban that was issued after officials discovered the use of the swastika on the pitch in 2015. The Southgate side will then travel to Seville to face Spain.