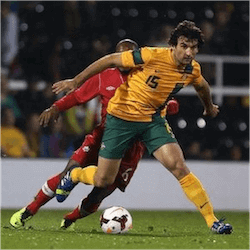 Socceroos Off to 2017 FIFA Confederations Cup

Australia’s soccer fans have to wait until next year for another FIFA World Cup, but that means it’s time for another FIFA Confederations Cup, the now four-yearly tournament that provides a regular World Cup preview of the national sides to watch in the year ahead.

Only eight teams qualify for the Confederations Cup every four years, and this year Australia has made it for only the fourth time in 10 editions of the tournament. The last time the Socceroos qualified was in 2005, when Germany hosted, but they departed after a whitewash in the group stages. Four years earlier, they finished third in Korea, after beating both France and Brazil.

The most successful FIFA Confederations Cup for the Socceroos to date has been the first one they qualified for, in 1997. The team stunned the football world with a 3-1 win against Mexico, followed by holding Brazil to a 0-0 draw, which got them to the semi-finals. A 1-0 win in extra time against Uruguay put them through to the final, where the dream sadly ended: Brazil ran away with a 6-0 championship win.

This year’s FIFA Confederations Cup is being held in four cities in Russia: Moscow, St Petersburg, Sochi and Kazan. The teams play the round-robin stages in two groups, with Group A comprising Russia, New Zealand, Portugal and Mexico.

Australia is in Group B with Cameroon, Chile and Germany, and they play their first match on Sunday: against Germany in Sochi’s Fisht Olympic Stadium. They then play Cameroon at St Petersburg’s Krestovsky Stadium on 22 June, and Chile on 25 June in Moscow’s Otkrytiye Arena.

Shortly before leaving for the Confederations Cup, however, the Socceroos suffered the loss of skipper Mile Jedinak, thanks to a stubborn groin injury that he aggravated in Australia’s recent 3-2 World Cup qualifying win against Saudi Arabia. As a result, the Aston Villa midfielder has been replaced by Sturm Graz’s James Jeggo for the Russian tournament.