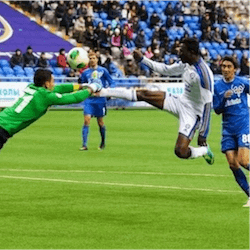 Kazakhstan Premier League Round 16 This Weekend

On Saturday and Sunday, Australian soccer fans can punt on Round 16 of the 2017 Kazakhstan Premier League. Three teams are locked in battle at the top of the ladder, with two more snapping at their heels.

Almaty, home to 1.7-million people, is still the largest city in the vast Central Asian republic, with double the population of the second-largest, Astana. As a result, the fans of FC Astana and Almaty’s FC Kairat make up the majority of Kazakh football supporters, with their teams continuing a proxy civic feud that has been simmering since the Soviet era.

Kairat has by far the more illustrious history, dating back to 1954. They’ve won the Kazakhstan Cup seven times since 1992, most recently in 2014 and 2015, and they were runners-up last year. Astana, in contrast, was only formed in 2009, 12 years after the city replaced Almaty as the capital, but they have achieved notable success in eight years.

Kairat are close behind on 34, however, although they have played 17 games, with nine wins and seven draws. And just two points behind them, on 32 from 10 wins and two draws in 17 games, is FC Ordabasy, from Kazakhstan’s third-biggest city, Shymkent in the industrial south.

Lying fourth and fifth on the 2017 Kazakhstan Premier League table are FC Irtysh Pavlodar on 28 points, and FC Tobol on 25; both teams from the north of the country. All five sides at the top of the ladder have matches this weekend, so betting fans will want to pay particular attention to the Ordabasy vs Kaisar Kyzylorda game on Saturday, and Sunday’s Astana-Aktobe and Pavlodar-Taraz matches.

The most exciting clash of Round 16 will probably be Saturday’s Kairat-Tobol match, however. The Almaty side will be after the top spot on the ladder, while Tobol will have a shot at moving up to fourth. Both teams will be giving their all, so the soccer should be intense.