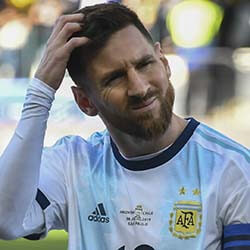 The news is official: Lionel Messi is leaving Barcelona.

The club announced the news this week, while citing financial and other obstacles as having attributed to making a new deal impossible. Messi had been fully expected to re-sign with the club he’s spent his entire career with, but La Liga-endorsed structural challenges have apparently made keeping club as well as player happy a thing of impossibility.

Messi’s management has apparently in the meantime been contacted by representatives from Paris Saint-Germain, but no new contract has been signed as of yet. Messi a number of months ago turned down contract offers from both Manchester City as well as Paris Saint-Germain, and is now expected to play a game of “wait and see” before deciding his next big career step.

Messi as recently as July agreed to staying on for five years at a reduced pay-rate, instead of the two-year extension initially tabled by the club. The hope had been that the longer agreement would keep the contract within the limits of La Liga’s financial rules. Sticking to the “fair play” regulations has however now proved impossible as far as the star forward is concerned.

Had Barcelona wanted to hold on to Messi, the club would have had to move several other players out – which is something they’ve clearly failed at finding a solution for. Since the club is limited by the league’s official salary cap, management hasn’t been able to offer the star forward his twenty million euros asking price.