Liverpool To Play In Qatar Tournament 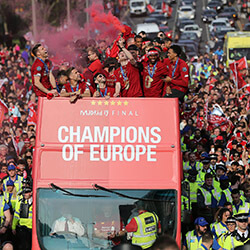 Liverpool is set to travel to Qatar at the end of the year to compete in the FIFA Club World Cup after the Gulf state was named as the next host for the event. The tournament, which takes place annually, will feature the champions from six different continents, and will be taking place with Champions League winners Liverpool entering the tournament in the semi final stage.

Qatar will be hosting the next to editions for the event for this year and the next, and will be hosting again in 20222. It had been reported that the Club World Cup would be happening this year after FIFA had approved a number of changes tot he tournament. Among these changes, one was to replace it entirely with a 24-team event that would be held every four years instead of the Confederations Cup.

The last appearance that Liverpool made at the Club World Cup was in Japan after the team had won the Champions League in 2005. At the event, they lost to South American champions Sao Paulo 1-0 for the final. Real Madrid claimed victory during 2018’s Club World Cub, where they beat the United Arab Emirates Al Ain for the final that took place at the end of the year, claiming their third title for the third year in a row.

It was further reported that the Qatar 2022 committee was proud of the work done after they released their latest workers report on current construction.