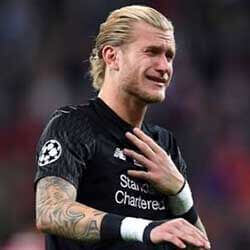 The dream of winning the Champions League quickly fell to pieces for Liverpool, who saw their beloved team fall to a series of mistakes made by Loris Karius, who’s blunders saw the win go to Real Madrid. By the end of the game, Real Madrid had won with a total 3-1 victory.

For Liverpool fans, it was a heart-breaking blow, and over 30000 of them gathered together in the Anfield stadium to watch the game. After their loss, the fans released a balloon in the shape of a trophy, marking their loss at Real Madrid, as well as the lost chance for Liverpool to win a sixth European Cup.

Dave Birket, a long-time fan of the reds, told reporters that he was ‘massively disappointed’ and that the entire thing was shocking to watch.

Many spectators at the stadium left before the game had even come to an end, and canons stuffed with confetti by the organisers remained unfired.

In stark contrast to this, Real Madrid fans were in celebration as their team managed to attain their 13th win in a Champions League final. On the same field, some like Mohamed Salah, striker for Liverpool, leaving the field in tears after just 30 minutes of playtime due to a dislocated shoulder.

While there has been disappointment for Liverpool across the board, others field proud that the team managed to get so far, and that they will just need to try again at the next Champions League.