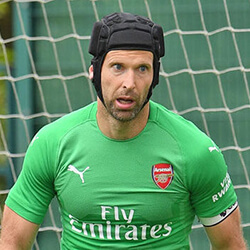 Former goalkeeper for Chelsea Petr Cech has officially returned to the club, taking on the position of technical and performance advisor. The 37 year old spent 11 years as a player at Stamford Bridge, where he won 13 trophies over his career, which included four Premier League titles and a Champions League title. He went on to join London rivals Arsenal in 2015, and retired from the Europa League final loss against the Blues in May that year.

Chelsea told reporters that the former Czech Republic international will be providing the team with advice on all football and performance related matters. Cech will also be facilitating strong links between the first team and the academy.

Talking about his new role, Cech told reporters that he feels privileged to have the opportunity to join the Blue again and to create a high-level performance environment that will continue the many successes that the club has achieved over the last 15 years. He added that he looking forward to new challenges, and that he hopes he can use his knowledge and experience to help the team earn more success in the future.

Cech will be working closely with Marina Granovskaia, the director of the club. Former manager Maurizio Sarri left the club to join Juventus after a single season in charge. With Blues midfielder Frank Lampard the favourite to take over the now vacant position, while the team itself is unable to sign on any new players this season.