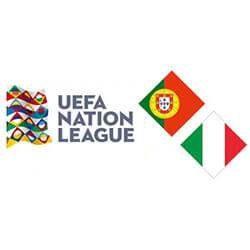 European champions Portugal won their opener in League A against Italy 1-0 for the UEFA Nations League. It was one of the first competitive-level games that the team has played since the loss of football star Cristiano Ronaldo.

Jorginho and Glanlulgi Donnaruma were the only two players that managed to hold on to their positions since Italy’s of 1-1 draw after facing Poland. The many changes that the team has recently undergone seemingly left them off worse than they had hoped, as they had already begun to struggle against Portugal within the first 20 minutes of the Nations League opener.

Portugal came close to scoring their first game during the 31st minute thanks to a strike taken by Mario Rui, but it was ultimately deflected by Byran Cristante; who knocked the ball into the frame. But it painted the picture for the first half of the game as Fernando Santos’ men controlled the field.

Just three minutes into the second half of the match, the European champions claimed their first goal as Andre Silva grabbed a pass sent over by Bruma and then sent the ball into the far corner.

With fifteen minutes left in the game, both coaches decided to make changes to the team that saw Renato Sanchez come on for Pizzi whole Mancini moved in Emerson from Domenico Criscito. Ultimately, it proved futile for Italy as Portugal held on to their lead to the end, and moved up on the League A roster.