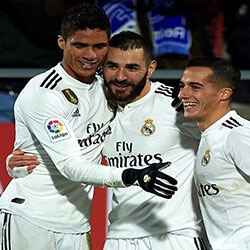 Karim Benzema has become the sixth all time top goalscorers for Real Madrid as the player scored two to push his side to victory over Girona, and have since advanced to the semi-finals of the Cop del Rey.

Real Madrid won the first leg of the match 4-2 and managed to extend their lead during the 27th minute thanks to Benzema curling a ball into the net. Benzema scored once again just before the half time break, shooting the ball into the bottom corner when unmarked.

Pedro Porro took one back for his side of Girona, but Marcos Llorente claimed a third goal for the visiting team from 25 yards long. Gareth Bale, forward for Wales, came on to the field as a substitute and played the last 23 minutes for his team. The match ended 3-1 in the second leg with Real Madrid in lead. The team last one the Copa del Rey trophy in 2014, finishing the season with a 7-3 aggregate in total.

31 year old Benzema completed a total of 446 games before making the move to Lyon in 2009, where he scored 209 times for the time, which consisted of 136 for La Liga, 47 for the Champions League, 20 for the Copa del Rey, and three in the Club World Cup. He scored a further two in the Spanish Super Cup, and a single goal in the European Super Cup some years later.