Ronaldhino’s Smiles in Prison as Australian Deal is Revealed 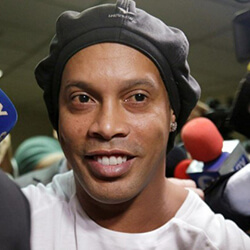 Ronaldo de Assis Moreira has been called stupid by his own lawyer, Adolfo Marin, after getting arrested for using a false passport to enter Paraguay.

Marin said that the former FC Barcelona and AC Milan legend didn’t know that the documents were forged as he risks a prison stay of as much as six months. He went on to say the Paraguayan courts have not taken into account that Ronaldinho wasn’t aware that he was committing a crime, not knowing the documents were fake because he is stupid!

While the lawyer appeals a court decision not to allow the Football star to be placed under house arrest, the first photos of his client have surfaced on social media, revealing him still sporting the broad smile he’s become known for.

Blas Vera, the head of the Paraguayan jail hosting the player, let it be known that, in broad terms, Ronaldinho’s doing very well. He remains in good spirits and has a grin on his face most of the time.

So far, he’s been visited by Carlos Gamarra, the former Paraguayan footballer and his brother, Roberto Assis, in prison as prosecutors work on expanding their investigation to include the possibility of money laundering.

Meanwhile, reports have surfaced that Ronaldinho was just about to be announced as the headline player for the upcoming Football for Fires charity match. The fundraiser will still be going ahead at Sydney’s ANZ Stadium on May 23 and promoter Lou Sticca said that, as long as his legal situation gets resolved, the legend from Brazil will still be appearing.