Russia and Iran Draw in Friendly 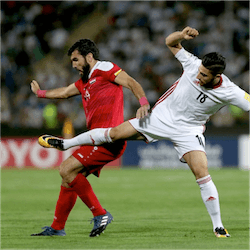 Tuesday night’s international soccer friendly between 2018 FIFA World Cup hosts Russia and Iran in Kazan played out to a 1-1 draw at full time. It’s a surprise result that may have some Australian fans re-evaluating both teams in next year’s showcase.

On the FIFA World Rankings ladder, Iran is at 15, while Russia languishes at 64, so many online sports betting enthusiasts were expecting a solid victory from the Iranians. The draw could be a positive sign of improvement for Russian football fans.

They didn’t have a lot to celebrate after their team’s 4-2 victory over South Korea last week, even though their opponents are ranked higher on 51. Both of the goals that made up Russia’s winning margin came courtesy of South Korean back Kim Ju-young, who covered himself in ignominy by finding his own net not once, but twice.

However much luck was involved, the win against South Korea sent the Russians into Tuesday’s match with a new sense of confidence. They held off the superior team successfully through the first half, but were unable to score themselves, either.

Russian keeper Andrei Lunev met his match in the 57th minute, when striker Sardar Azmoun put one past him after it had been pummelled through the backline by Mehdi Taremi. The Iranians didn’t get to celebrate too long, however; Alexander Samedov put a solid cross over to Dmitry Poloz in the 74th minute, and the Russian striker completed a daring slide to get a touch on it and beat Iranian keeper Alireza Beiranvand. Solid defence on both sides thereafter saw the scores remain tied for the final 15 minutes of the match.

Although only a friendly, Tuesday’s result will be a hopeful sign to Russian fans worried that their side will embarrass them as World Cup hosts. Their humiliating premature exit from the Confederations Cup, held in Russia earlier this year as a tester for next year’s main event, had some supporters fearing the worst.

The last time the FIFA World Cup was hosted by a footballing minnow was in 2010, in South Africa. It is a tournament remembered for two things: widespread allegations of corruption, and the hosts getting knocked out in the group stages. It’s not a reputation that Russia’s World Cup organisers will want to inherit.