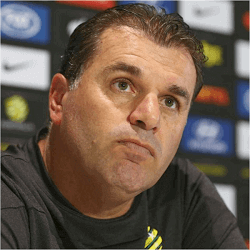 Socceroos Coach Ready for the UAE

Ange Postecoglou, the tough-talking Socceroos coach expects the United Arab Emirates to be afraid of his team going into their World Cup qualifying match in the UAE. The high flying Socceroos kicked off their campaign with a stunning 2-0 win over Iraq in Perth last Thursday. The win set the team up for a great start on the road to Russia in 2018. However, playing in the temperate Australian weather will have no bearing on the searing heat of Abu Dhabi and the toll it will take on the team.

Undaunted by the extreme weather and hostile crowds, the Asian Cup winning coach believes that the UAE have every right to be afraid of his team going in. The organises in Abu Dhabi are hoping to fill the massive 42,000-seat venue on the back of the UAE’s win against a touch Japanese team in their first qualifier. While the world looks for another amazing upset, the Australian coach is talking up his team, urging all fellow Australians to do the same.

Possibility of Jedinak Missing the Match

Speaking to the press, Postecoglou said that he thinks the United Arab Emirates players will be a bit fearful of his team, and have every right to be. He expects them to sit back, as other teams probably hold them in higher regard than they do themselves. Going into the match, Jedinak is the only Socceroo to have started all three meetings against the UAE. However, Jedinak did not make late training and could possibly miss the match altogether, as he had a little bit of a knock and has been taking it day-by-day. When asked whether or not he’d be playing, Jedinak  said he’d see how they go, and that a decision had yet to be made.

Postecoglou aims to give the star every opportunity to recover and has said that if he’s not able to play, they’ll bring in someone else to do the job. When talking to the press, Postecoglou stated that set pieces would be their biggest threat, with direct free kicks a major concern. Concerning the talented midfielder Oman Abdulrahman, the coach said they may try and get free kicks, and his team have  got to be disciplined in their approach to defending, so they won’t allow those things to happen.

The daytime temperatures in the UAE have soared to over 40 degrees since the Socceroos arrived. While the mercury will drop to around 30 in the evening, the added humidity could be an issue. The coach is however determined not to let this be an excuse, and has stated that there’s no one better in the world than Aussies in dealing with this type of challenge.