Socceroos Draw 2-2 With Thailand In Qualifier 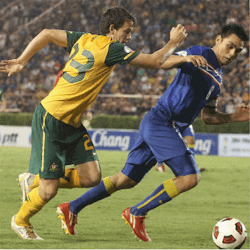 It was a day that Australian sports fans would sooner forget. After suffering a crushing defeat at the hands of the South African cricket side, it fell to the Socceroos to restore some national pride and bring some sense into the world of sport. Unfortunately, things went from bad to worse for Australian punters and sports fans as the mighty Socceroos were tamed by the minnows of the soccer world, drawing their qualifying match 2-2 with Thailand.

Their failure to produce a win against the lowest ranked side in their group has meant that the Socceroos have slipped down to third position in their World Cup qualifying group. With Japan winning their match against Group B leaders, Saudi Arabia, the Socceroos were completely shunted off their spot at the top and is now in a dangerous position, as only the top two teams automatically qualify.

Thailand, who had yet to win a match, was playing for national pride in honour of their late king who passed away on the 13th of October. King Bhumipol Adulaydej was apparently a keen sportsman and would have wanted nothing more than to see the Thai team defeat Australia. With it all to play for, the fired up Thai soccer team came out with a point to prove. The Socceroos were the first to get into the match though. After just 10 minutes of sustained pressure, the Thai defence cracked with Thailand defender Pratum Chuthong mistakenly palming the ball inside the crucial boundary of the box.

A Match Filled with Penalties and Mistakes

The handball led to a penalty for which Jedinak was up to the task. He expertly slotted the ball passed the goal keeper to give Australia the lead 1-0. Despite the many opportunities given to them, the Socceroos failed to take advantage of the Thai teams poor defence. With all the focus on Australian offence, the Tai team capitalised on the small bit of possession they did get and quickly drew level. With one in the bag, Thailand found their feet and started to penetrate the Australian defence on a regular basis.

In the second half, the Thai dominance continued forcing Mathew Leckie to make a dangerous challenge on the Thai captain Theeraton Bunmathan. The subsequent penalty put the Socceroos on the back foot, forcing Postecoglou to make a series of substitutes. The change made an immediate effect with a foul going Australia’s way and a penalty took up the deficit. Despite their bets efforts, the Socceroos could not penetrate the Thai defence again with the match ending in a 2 all draw.