Syria The Make/Break Of Soccer Hopes 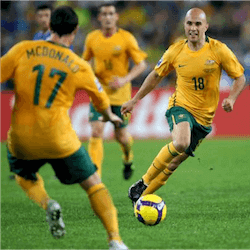 Socceroos Hang In The Syrian Balance

Few would have foreseen that war-torn Syria would be the make or break for Australia’s Soccer World Cup dreams.  The wheels were set in motion back in 2015, when Australia managed a very narrow defeat over South Korea in the 2015 Asian Cup.  During the third round – keeping in mind that only the top two teams would automatically qualify for Russia – the Taeguk Warriors scraped through by the skin of their knees into second place in the Group A division.  North Korea would have dropped down into third place had Syria not ended up in a draw with Iran.

Australia, in turn, missed out on automatically qualifying when Saudi-Arabia pipped already qualified Japan during the last game of the round – edging the Socceroos for second spot as a result of the superior goal difference.

This has all culminated in a two match play-off set to take place in October, between Australia and Syria.  The winner’s reward will be the right to compete in a November showdown with the fourth-placed team from the Central and North American region.  The winner of the showdown will eventually be awarded with the opportunity to play in Russia in 2018.

Syria has shown itself worthy of being called a side adept at overcoming exceptional odds stacked a mile high.  The team had been unable to play games on home turf due to the relentless political conflict raging in their country.  In order to compromise, home games had been played at a mostly deserted stadium in Malaysia – certainly not your typical forerunner to World Cup glory.

Syrian coach Ayman Hakeem praised his squad, saying that he was proud of what they had managed to achieve, despite their circumstances.  He also said that he believed that the team had strong prospects of going to through to the World Cup, but that Australia was bound to put on a fight.

Australian coach Ange Postecoglou has responded to fiery criticism from the likes of former Manchester United and Australia goalkeeper Mark Bosnich, by saying that he refused to be degraded to the status of yet another coach to have failed in the history of Soccer, and would not be spending any time responding to criticism, as this would be a total waste of time.

When asked about the general feelings about what to expect when going up against Syria in October, Chief Executive David Gallop said Australia was obviously disappointed at not having managed a direct qualification, but that he and the team felt confident that Australia could still make it to the 2018 World Cup in Russia.