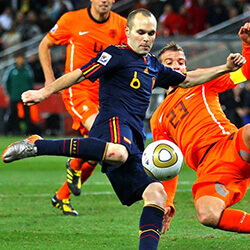 Among the many nominees for the best goal at the 2018 FIFA World Cup, Lionel Messi and Cristiano Ronaldo are among the top picks. Despite both of the players leaving relatively early into the international event, their performance in their relative games has earned them nomination for the prestigious award.

FIFA recently announced that they had made a nominee page for best goal available on their official website, allowing fans to decide who they believe should be awarded the honour. Other notable nominees that are up for consideration are France’s Benjamin Pavard and Spain’s Nacho Fernandez.

Messi’s nomination was thanks to an incredible strike he landed while his team was playing against Nigeria in the group stage, not long after his run was picked out by midfielder Ever Benega.

Ronaldo managed a brilliant free kick during their game against Spain during Portugal’s opening match that took place at the start of the season. The late-stage strike added another point to the team, but also finished off a hat trick for the player.

All the players up for nomination include:

Denis Cheryshev – vs. Croatia and vs. Saudi Arabia