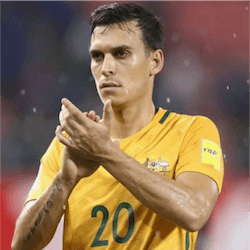 Sainsbury has been vocal about what he deems the poor treatment the press has given them, especially after the negative reaction to the 3-2 win. This win put the Socceroo’s in a good position to qualify for Russia on 2018, and Sainsbury feels the lambasting the media gave them was very unfair.

Sainsbury has said that he feels that everything the team does gets a hammering these days, and that the media is the biggest culprit of them all. He said that for the team, it was nice that they got to stay together, and that those 3 points should have proven just how well they played, rather than drawing criticism. He says that their performance fortified the team as a unit and that for a change; it would be great if the Australian public would be on their side.

Sainsbury added that the team had tried not to focus on the seemingly unending negativity, but they were coming up against it every day, and it was the nit-picky stuff that always made the headlines, rather than the real news, such as the team’s 3 point win. He did say that he knows the Socceroo’s had made it hard for themselves but their aim was to win, and they did, regardless of how they got there.

They also rose to the challenge and as a team they worked together cohesively. The Socceroos want to qualify for the World Cup, but they are determined to do it their way, in a way that meets their objectives and works for them as a team, and having the media and public bashing them doesn’t really help their morale. It may spur them to try even harder to prove themselves, but not feeling like the nation is behind them is hard.

He’s hoping that in the upcoming games they’ll get better press, and that the media and fans will start praising them regardless of their opinions, as at the end of the day, they are on the field and are the ones who really want to make it through to the World Cup. How they get there may not be the way others want them too, but the goal remains the same.

On Tuesday Australia will host world number ones Brazil at the MCG, before they depart for Russia the following day to battle other world heavyweights in the Confederation Cup.