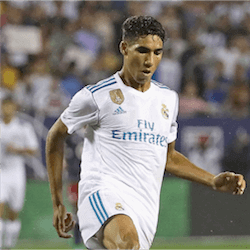 Nepotism obviously cuts no ice in the Zidane household. French Real Madrid coach Zinedine Zidane has just named his squad for the FIFA Club World Cup in UAE, and his son, Luca, is not in it, despite being the Spanish side’s usual third-choice goalkeeper.

Instead, Moha Ramos will join Keylor Navas and Kiko Casilla on the keepers list, with Cristiano Ronaldo, Karim Benzema, Gareth Bale and Borja Mayoral up front.

The defenders are Dani Carvajal, Sergio Ramos, Raphael Varane, Nacho, Marcelo, Theo Hernandez and one of the stars of this year’s season, Achraf Hakimi.

Madrid-born 19-year-old Hakimi, better known simply as ‘Achraf’, is a typical example of the confusing state of migration between North Africa and Europe, and the tensions and controversies that arise because of it.

He was born and raised in Spain, so by most objective standards, he’d simply be Spanish. However, his parents are Moroccan immigrants, so while he plays his club football for Madrid, he does international duty for Morocco.

However awkward his position with one foot on each of the Pillars of Hercules might be, he does sometimes score the best of both worlds. For instance, this year he gets to play in the FIFA Club World Cup for Real Madrid, and next year he’ll go to the FIFA World Cup in Russia on the Moroccan team.

Morocco are in Group B with Spain for the 2018 tournament, so Achraf will be squaring off against some of his club teammates.

The FIFA Club World Cup is a somewhat lopsided competition, with seven clubs qualified from the six continental confederations, plus the national league champion from the host country. As a result of the odd number and their status as defending champions, this means that Real Madrid don’t have to play in the opening two rounds.

They won’t be in action until the semi-finals on 13 December, when they will face Al-Jazira, Auckland City or Urawa Red Diamonds.