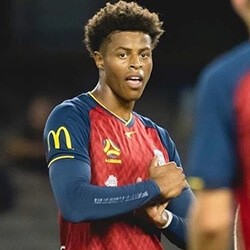 Yengi scored his debut A-League goal during the 61st minute of the game, celebrating his accomplishment with a victory leap over the advertising boards in front of Victory supporters.

Kosmina has said that the club is appalled by the racially driven comments made on the 22-year-old’s Instagram account following Saturday’s game, adding that the A-League club prided itself on inclusivity. He described the racial abuse directed at Yengi as uncalled for and upsetting, adding that the entire club was behind the young player and that the matter had since been referred to the League and police for further investigation.

The incident took place only a week after Western Sydney forward Bernie Ibini spoke out about the racial abuse suffered and threats made to his own family on the social media platform. Ibini told the Guardian Australian that since “uneducated” people felt invincible and immune to repercussions on social media, they assumed that they could simply say whatever they wanted to without thinking of the consequences to others.

Saturday’s goal was a breakout performance by the star young attacker, which performance has now without a doubt been marred by the disgusting social media comments that followed. While many of the comments have since been removed from the platform, the club said such comments highlight the endless battle and abuse footballers face across social media platforms.